We made it. We made it in the land of Trump right after the Muslim ban was approved by the Supreme Court. For our first trip together in the US we decided to go to Chicago to visit a good friend of Sourena who had been waiting for our visit for years and to New York to visit one of my best friends from high school who had temporarily moved there. To match everybody’s plans timing was crucial and we went in the deep winter time. I would not recommend it, it just gets nasty cold, but at the same time it gave us a unique experience of these two cities.

I am going very quickly through the itinerary and articulate more on the exceptional experiences. Diaries when visiting friends just don’t make sense as time and space don’t matter.

We flew to Chicago from Rome with a stop in Dublin and even if it made the whole trip longer, I would definitely recommend it for one specific reason: immigration. By the time we were flying to the US, passing through all the paper work (Iran is the key word) and the bad stories we heard we were very happy with the immigration procedure in Dublin. Sourena had still to pass extra security checks (SSSS appears on your boarding pass if that’s the case) but it went really smooth. In total it didn’t take longer than 50 minutes and once in Chicago we were free to go.

We stayed at our friends’ place in the Roscoe: a pretty, family vibe, white neighborhood in the north of downtown. Time at friends’ means a lot of couch and chitchats, life updates and general laziness. This was exaggerated by the fact that it was -22Celsius and I got the flu along the way and it wasn’t even because I was throwing water outside to see if it froze instantly. 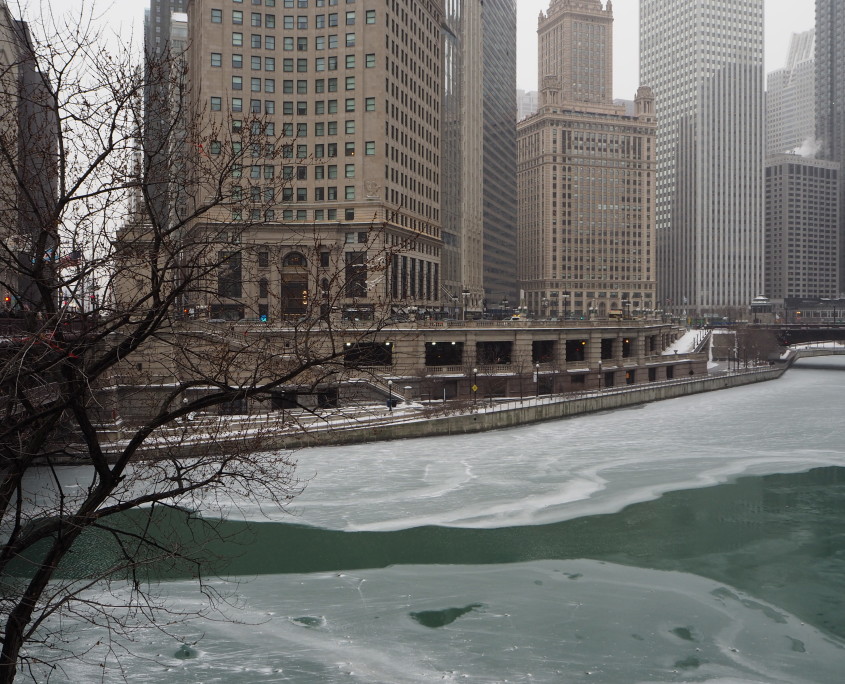 In the 5 days we stayed we anyway managed to discover the city as we like, checking the highlights, discovering the underground scene and living the normal life of people.

I asked other friends with roots in Chicago what are the must-do things and I am happy to share them as they really made the trip worth it, plus I’ll a couple of my own:

On the side I need to mention two niche experiences for the perfect day tour, the first for tv-series addicts and the second for architecture lovers. On the last day of the year we decided to drive to the west of the city to explore the area where Shameless is filmed, I had read online that it was not the best area and to avoid going after dark, but when we got there we discovered that the only shocking element was the fact that we were the only white people in a very wide radius. It never felt unsafe, but at least challenging to experience such a division. To move around American cities highways are the most convenient way but once you exit you can find yourself in a completely different environment than the one you left when entering it.

We drove to the main location of the series, the Gallaghers’ house, and we happily discovered there that the owner had made a small business out of this lucky chance in life: 5dollars to enter the front yard and take pictures. It was all properly managed: bucket hanging from a tree where to drop the money and landlady checking her business from behind the curtain. 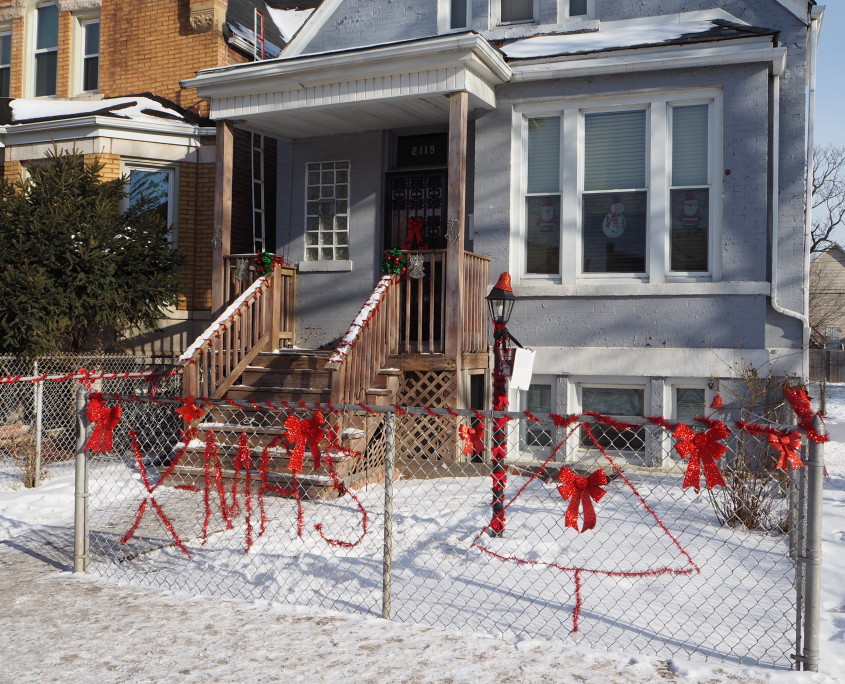 From there it was a nice drive towards Oak Park, one of the most beautiful residential neighborhoods of the city. There Frank Lloyd Wright, one of the most influential American architects of the 20th century, started what will be later called the Prairie School movement. We went for a guided tour of his house and studio and while being less perfect than other projects it was very fascinating to see the spaces he created for himself. Luckily we were too hungry to go back to the gift shop otherwise I would have spent a fortune. Side note on the side note, one of Giuliano’s pizza places is right around the corner.

At the end of our stay in Chicago we found ourselves very opinioned about the American system of living, somewhat fascinated by it, but also skeptical about the way opportunities are given to people. At the same time, and on a much more superficial note, we were amazed by remote starts to warm up your car from the house and we were ready to go to New York and discover its little secrets so we kissed goodbye our perfect hosts and headed to airport for a domestic flight to New York.

After our dose of disservice by American Airlines, we arrived at La Guardia airport late at night but as I experienced in the past I really like arriving in a new city late at night, it makes you feel teleported in a new reality when you wake the morning after.

We based ourselves in Brooklyn and even if the airbnb where we stayed was super nice and a perfect hub to commute anywhere in the city I would recommend a different area in Brooklyn. Bushwich is safe and friendly but just not that pretty and with few facilities. We had the chance to discover the rest of Brooklyn during our stay and you could really tell that it’s the right place where to experience New York but areas like Slope Park, Bedford and Williamsburg have something more to fall in love with.

The friends we were visiting had been living in the city for slightly less than a year and we met them for their last week in the city. They were eager to suck all New York has to offer for the very last time and they managed brilliantly to transfer their love for the city.

In 6 days we managed to explore a lot while keeping it very easy: the impressive 9/11 Memorial, One World Trade Center, colorful Chinatown, Mulberry street, Little Italy and the New Museum of Contemporary Art, the perfect Flatiron, Union Square, the Guggenheim, Central Park, St Patrick Cathedral, Fifth Avenue, Bryant Park and Grand Central Station, the Brooklyn Bridge, Chelsea, the not-so-enjoyable-in-winter High Line and the Whitney Museum of American Art in the most windy spot of the city. 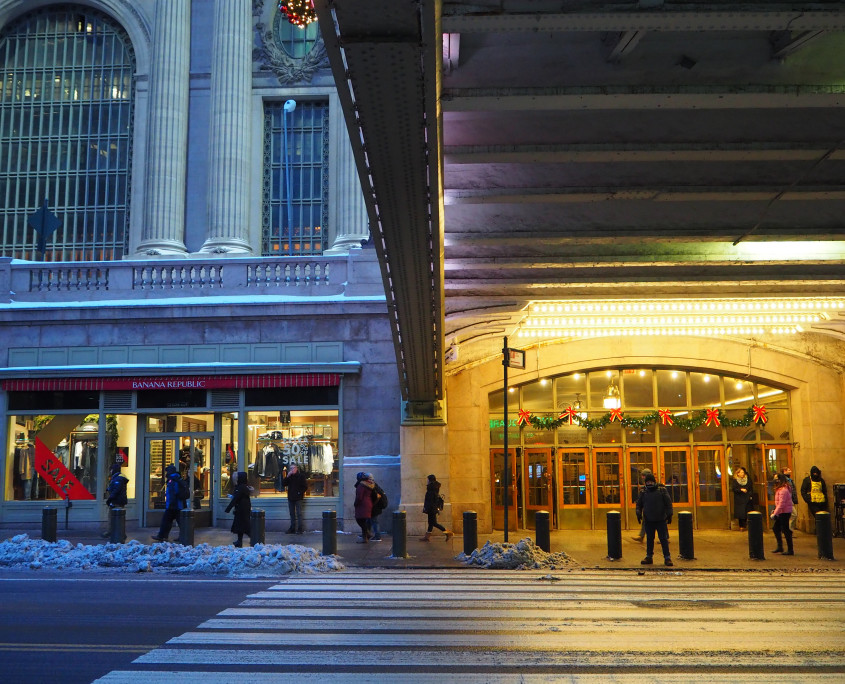 So, many many things and I kept a couple out of this generic list because they really worth extra attention: