Finding a destination for a weekend getaway while pregnant was not an easy task.
We were looking for something relaxing, exciting and safe at the same time and after days and days of research and consults with the Dutch Travel Clinic we decided that Morocco was going to be the chosen option and it worked out great.
Food, climate and atmosphere were exactly what we needed. Zika denied us the tropical vibes, but we were quite happy with this alternative a couple of hours far away from home.

We arrived in the afternoon and took a taxi to our hotel after a very smooth passport control.
A 200MAD brought us to destination and we were quickly accommodated in our room at the stunning Palais Faraj. We took it easy in the heat of the afternoon and relaxed by the pool till we (babygirl and I) felt hungry and we headed out to discover the Medina. 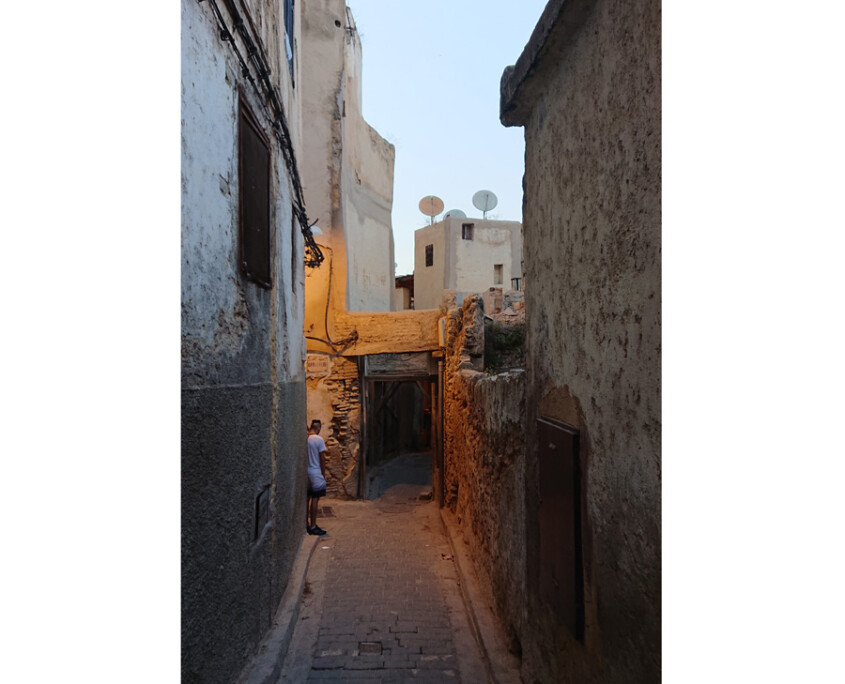 We walked the googlemaps way till we reached, not without struggling, Café Clock. We sat at the intermediate balcony and enjoyed the buzzing vibe of the place, ordered camel burgers as recommended by every article I had read, alcohol free beer and an homemade mint lemonade that gave Sourena his worse brain freeze.

Full and pleased with the dinner we decided to get lost in the complex network of alleys in the old town, but didn’t really succeed, we walked around the closing shops and bought essentials from a kiosk along the way.

We arrived back at the hotel, made ourselves tea and enjoyed it at the beautiful courtyard till night

We woke up early, on our time zone and decided to wait for breakfast by the pool.
We went to change and enjoyed the buffet with a view over the medina.

Taking advantage of the good temperature we headed out for a coffee at the lovely Fez Café and walked from there to the Chaouwara Tanneries. 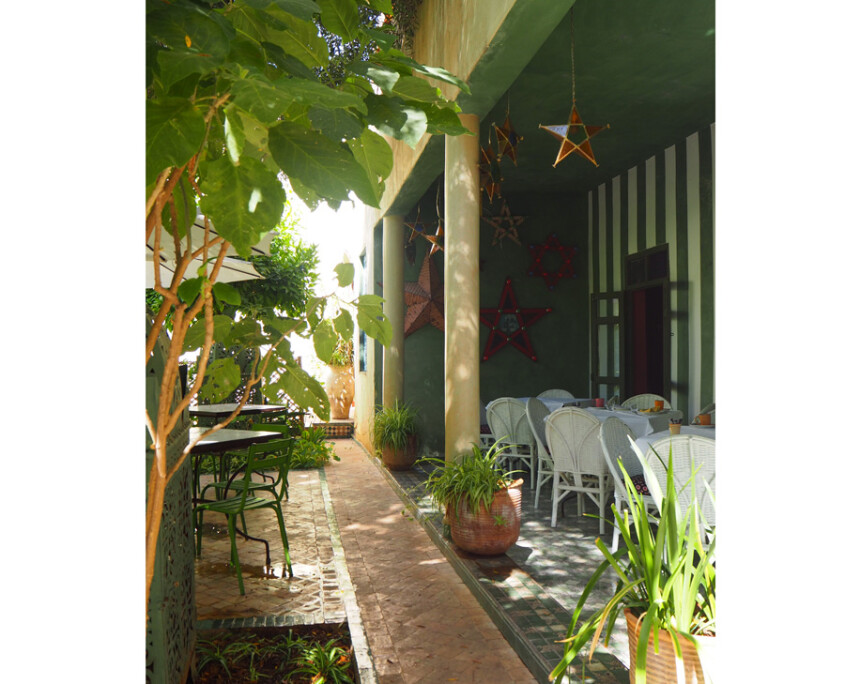 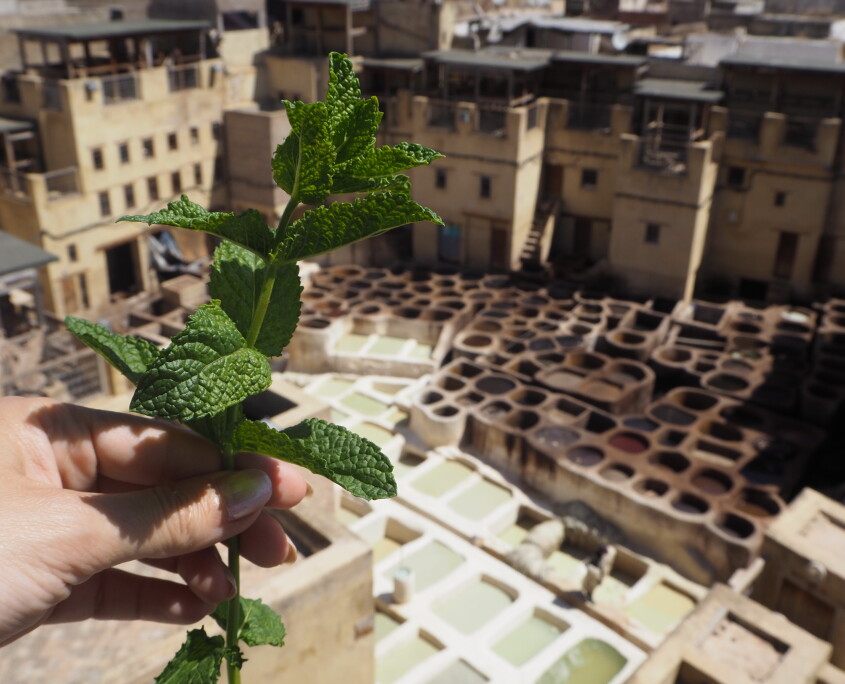 We avoided a couple of vendors trying to confuse us with the wrong directions and finally gave in. We raced the crowd following a shop owner ready to show his best products, climbed up till the rooftop of his shop and took a look at the tanneries while holding mint leaves.

The fascinating process of softening and colouring the leather was indeed nicely explained to us and we were happy to buy a beautiful leather belt for 220MAD.

On the way back we passed El Galoui and El Mokri (two palaces that stories describe as very beautiful), but they both looked closed or inaccessible.

By the time the heat arrived we were already back at the pool of the hotel and it felt like a little slice of paradise.
We started getting hungry and walked to the Ruined Garden for lunch, we ordered tagine, soup and vegetables and everything was delicious; even more with the pairing of fresh peach, orange and watermelon juice and dates and orange blossom milk. 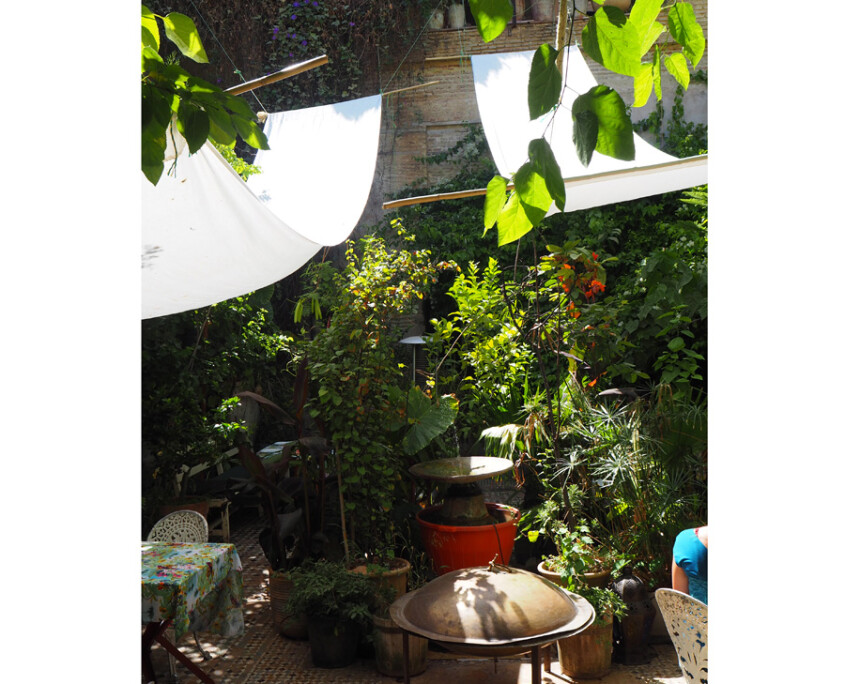 After all that, we could only walk very slowly back to the hotel for another round of sun.

We had thought to go to the Jewish district for a quick visit before dinner but we had underestimated how difficult it is to grab a taxi so we gave up and just took it slow.
We arrived early for dinner at Darori Resto and ordered again tagine (chicken this time), pastry with vegetables and different dips that came with delicious fresh bread.
Again, everything was delicious but I preferred the atmosphere and the lamb tagine we had for lunch.

By the time we were done with dinner it was still quite early and we thought about finding the best rooftop to have a drink but instead decided to go with the flow and head to the hotel and chill.

After finally getting actually lost, finding ourselves at the same corner twice, we knew we needed a break and stopped for a drink at a café overlooking Blv Ben Mohammed El Alaoui. Sourena was forced to train his Arabic and we managed to order the worse mint tea and a safe tonic water.

We resisted for a while the cold evening breeze hypnotized by the movements in the square and when we felt inspired we try to find our way back to the hotel. At this time we managed without problems and celebrated cozying up in bed.

We woke up with a mission: visiting the Kairaouine Mosque. We were ready for the challenge and determined to use my newly given right to enter it.

After a nice breakfast at the hotel we suit up in our best Muslim outfits and headed towards the mosque, when we got there we were told that tit would open at 11:00 so we decided to go for a coffee at the rooftop of the Wood Museum at the Nejjarine Fondouk. 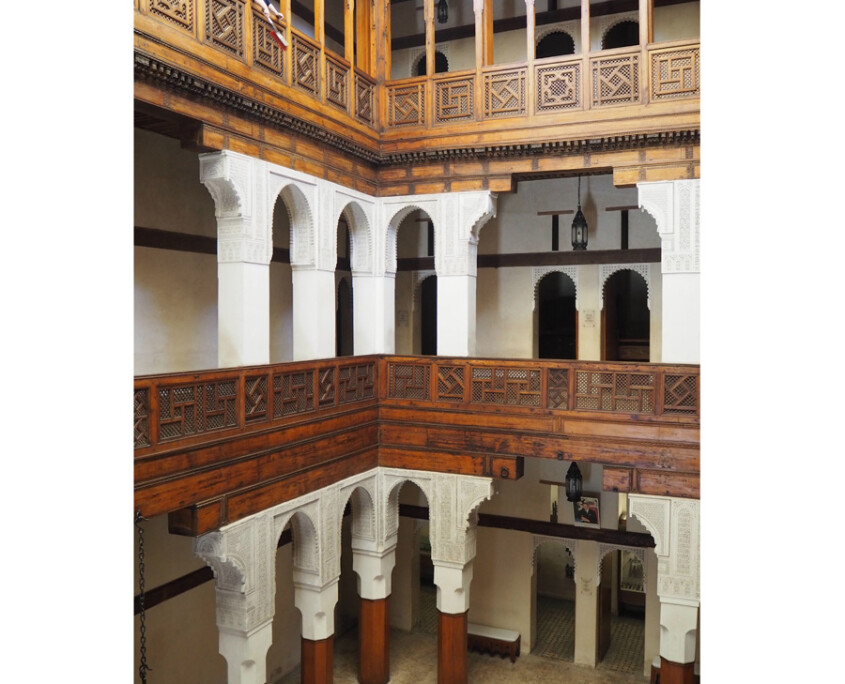 On the way there we saw the entrance to the Al-Attarine Madrasa and went in for a quick look of the interiors of this beautiful college for Islamic education. 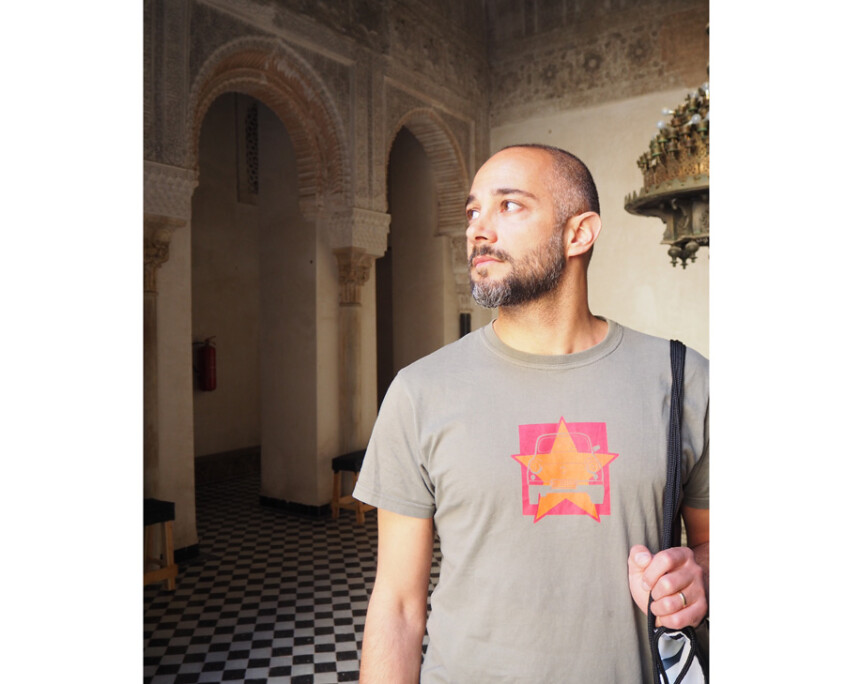 Happy with the private viewing of this little gem, we were ready for our coffee and arrived at the fondouk exactly when the gates were opening at 10:00.

The cleaning ladies were still dusting the wooden panels and we helped them turning all the lights on.
When we were all done, the same woman opened the tea house for us and we enjoyed a break on the rooftop overlooking the tanneries area and the mosque.

We showed up at the mosque precisely at 11:00 but there was no sign of opening. We asked again and apparently we had heard it wrong and it was 11:30 so we decided to wait by walking around the impressive mosque wall, spoke about ethical tourism and rehearsed my lines as a Muslim.

Beside the fact that opening hours are a fluid concept in Fes, we figured out what the real problem was: the mosque would open at the exact moment of noon (which is based on the alignment of the sun) and the time had just changed the night before leaving many people outdated or confused. Long story short, the mosque would open its gates for the midday prayer at 12:30.

After some doubts on what was the best thing to do we decided to wait sipping a cold drink and go directly for lunch afterwards. 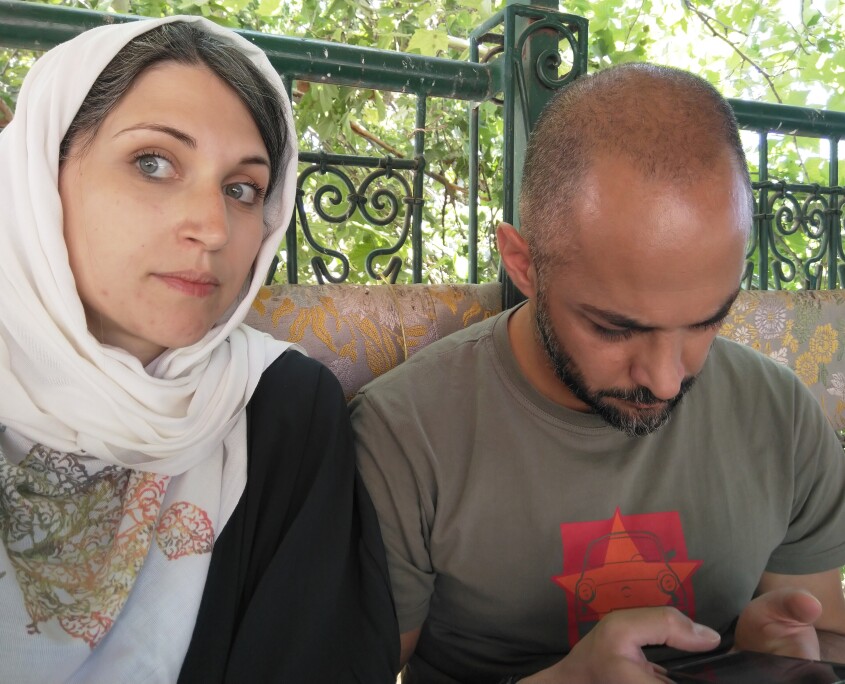 And the plan worked.
We managed to get in and it felt good to be stubborn. Sourena was allowed in the pretty part of the mosque while I had to stay on the sidelines with the ladies. 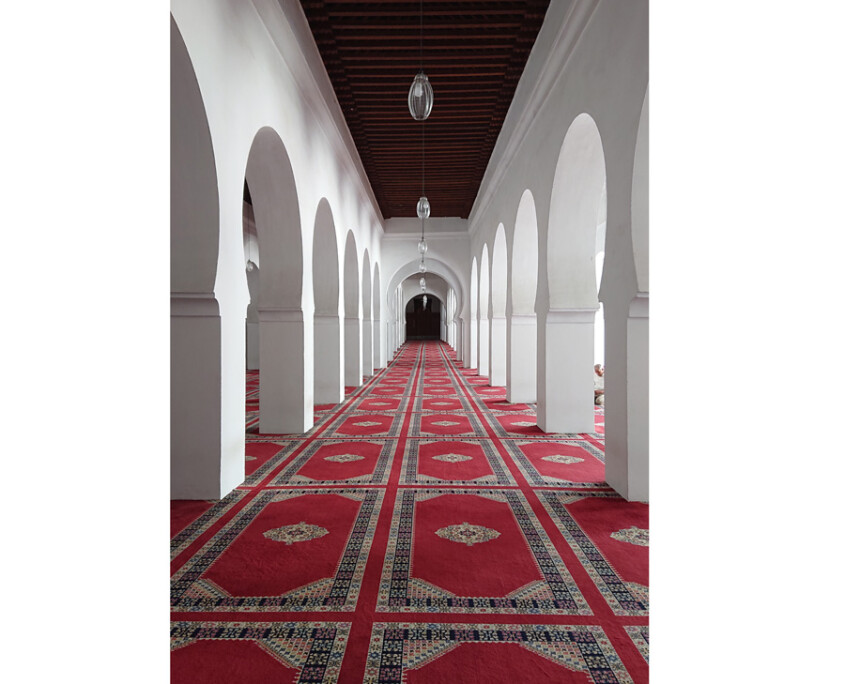 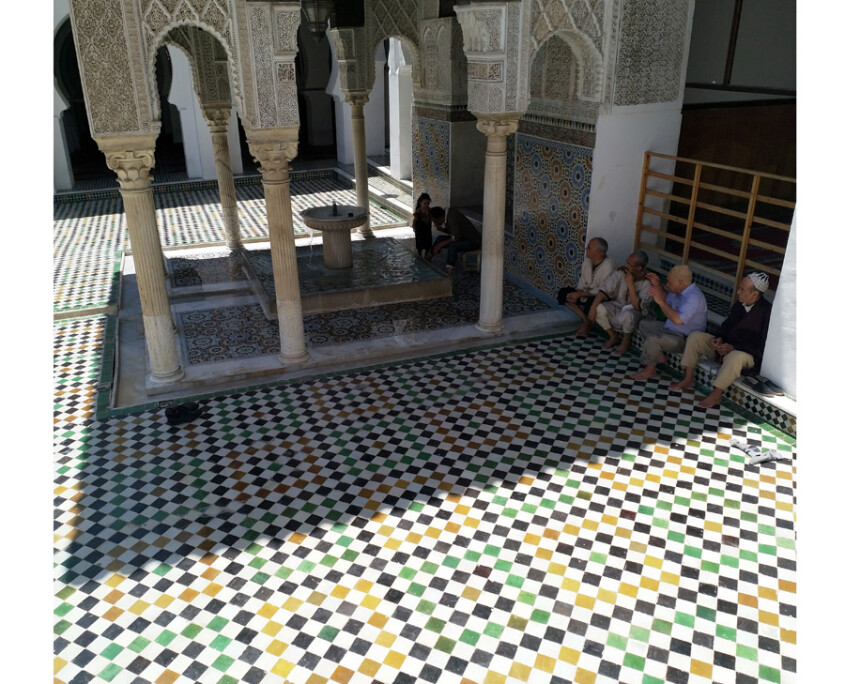 Satisfied with the accomplishment we went back to the Fez Café, this time for lunch and we were quite impressed.

Full and tired we then walked to the hotel and conquered the long chairs in the sun for two hours of relax.

Few things were left on our wish list and we decided to try again to fetch a taxi (petit taxi) to Mellah, the Jewish district. 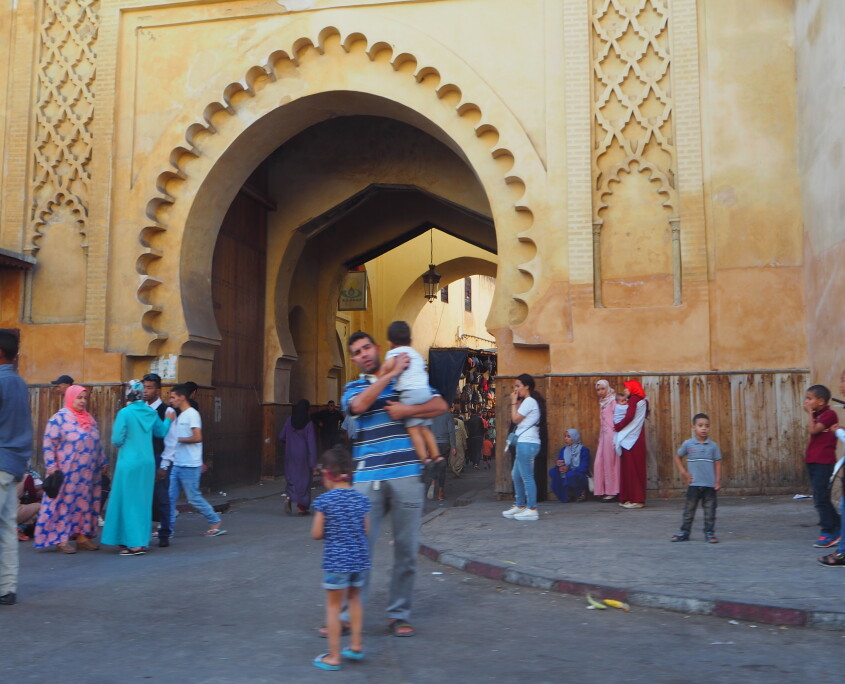 I was personally a bit underwhelmed, but I guess it was still nice to see a different side of the city. Going there we also passed the Borj Nord and the Royal Palace and decided to take a taxi for the way back as well and take it very easy by having dinner directly at the rooftop restaurant of the hotel, l’Amandier. The sunset was particularly beautiful from there.

DAY4
The last day in town is quite simple to summarize as we spent most of the morning at the swimming pool despite the cloudy start of the day and when it was time to check out we simply relaxed and snacked till our ride to airport arrived. 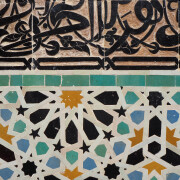 Fes: what to expect, what to do and how to do it

Fes: what to expect, what to do and how to do it
Scroll to top