When I started planning this trip to London I hadn’t realized how many people I know in the city and it became quite quickly the best occasion to catch up with as many of them as possible.

By the past experience of Dutch winters I knew that a small vacation in February is the best way to break the monotony of the season and choosing London we knew we were not going to run away from the weather, but we were finally embracing the opportunity to travel to England with Sourena’s (almost) new Dutch passport.
I will use this occasion to point out how privileged European passport holders are and how I had never felt its value before meeting my husband whose Iranian passport showed us the limits of international policies.

This said, back to the trip to London.

We planned to stay from Friday to Sunday, a short break to rediscover a city that didn’t make a great impression on me the first time I visited it 10 year before.

We looked at different options for airbnbs, but quickly realized that we were too late to get the good deals and decided to research ecofriendly hotels in town. To my surprise, once you start looking many options arise and I selected three options for Sourena to choose from: CitizenM, the Zetter and Qbic.
These three establishments embrace different levels of sustainability and we finally chose for the first option, CitizenM Tower of London specifically, and we were definitely not disappointed.

We arrived at Stansted Airport for breakfast and easily got on a ticket for the direct train to the center of London. Once we got out of the Liverpool Street station we immediately stopped across the street for an English breakfast at Polo Bar. The huge billboard at the entrance promoting their breakfast looked like a touristic trap, but by the look of the people, the service and the pub atmosphere we immediately realized that it simply was a place with great English breakfast. We ordered one to share and the waiter couldn’t but pity us a little. We started doubting the choice, but when the huge plate filled with eggs, bacon, black sausage, beans, mushrooms and tomatoes arrived we knew we could have never finished two of those portions. We had coffee on the side, ordered a sweet pastry to end the treat and walked to the hotel hoping for an early check in or at least to drop out luggage. 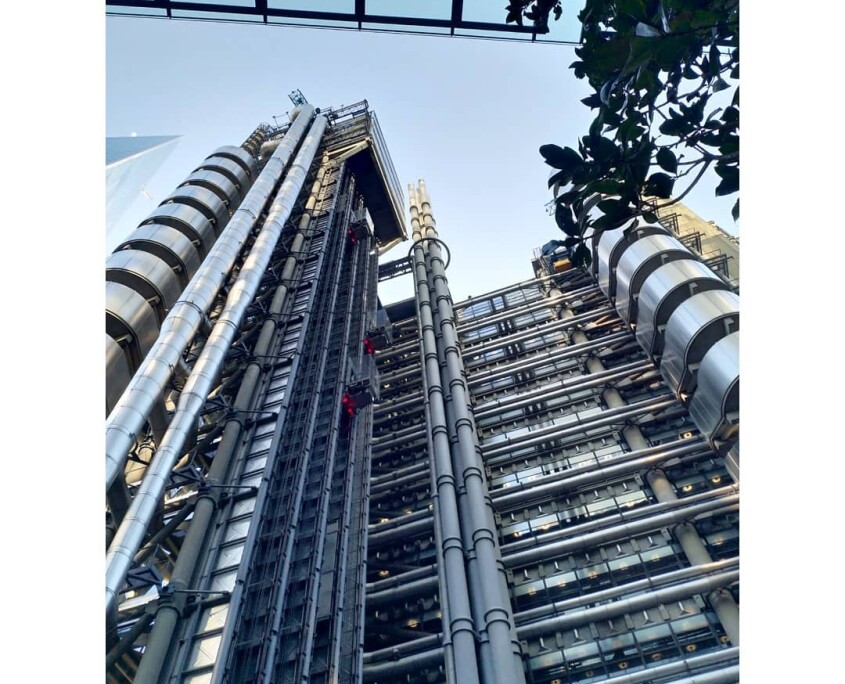 The CitizenM Tower of London was a 10 minutes’ walk away, we managed to get lost among the street renovations and found ourselves staring at the skyscrapers even more that what we did in New York.
We passed below towering architecture celebrities and when we arrived in Trinity Square, O. was waiting for us with a big smile.

We fought a little with the automatic reception and were happy a human could help us with it. I had done the early check-in online and specified we would like to check in at 11 instead of 14 and thanks to that we were already assigned a room.

We all went to check the room with a beautiful view over Trinity Square, I dropped my backpack, selected a couple of things I would need in a tote bag, left my husband to work a bit and headed out for a walk with O.. She surely is one of my favourite people and we don’t see each other often enough, but when we do it feels like we never were apart.

The sun was shining and we decided to walk towards Brick Lane, we immediately started talking about everything and nothing and quickly arrived in this vibrant part of the city. We passed Indian restaurants, cute little houses, beautiful street art and uncountable thrift shops. We tried to resist entering any of them, but the suddenly decided to randomly enter one, it turned out to be The Vintage Shop. We were immediately overwhelmed but how big it was and I will always wonder why we didn’t buy this sunglasses. 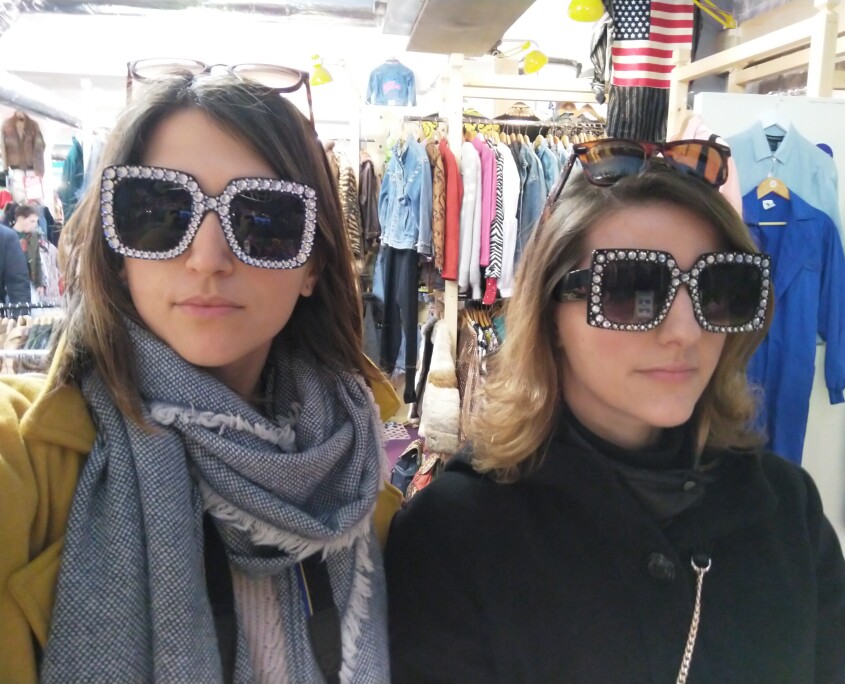 Proud of our self-control, I suggested treating ourselves at the Cereal Killer Café. If you are a fan of the 90s, Spice Girls or cereals this is surely the place to be. I ordered a boring tea, staffed as I was after the English breakfast, and O. went for a luxurious milkshake. 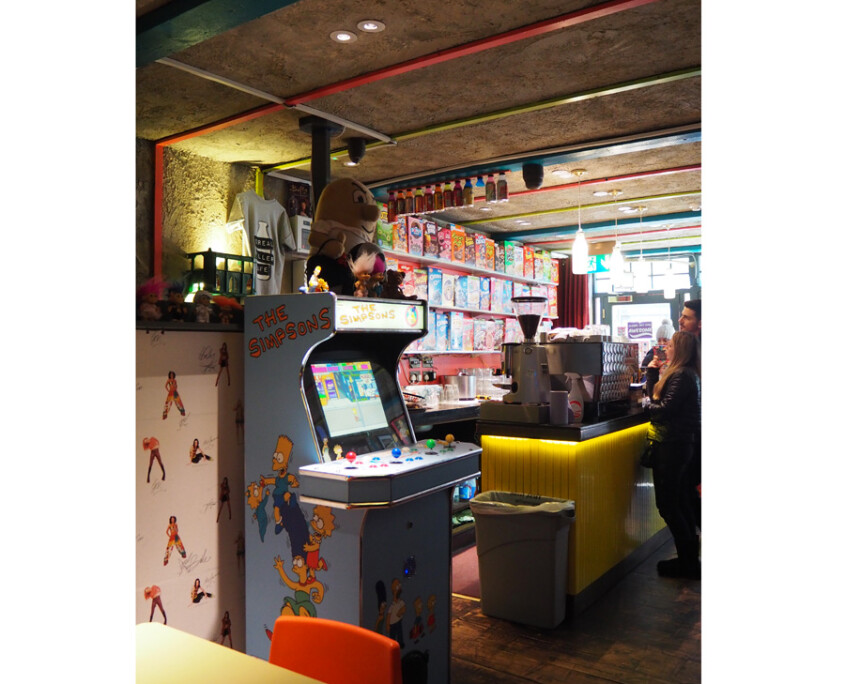 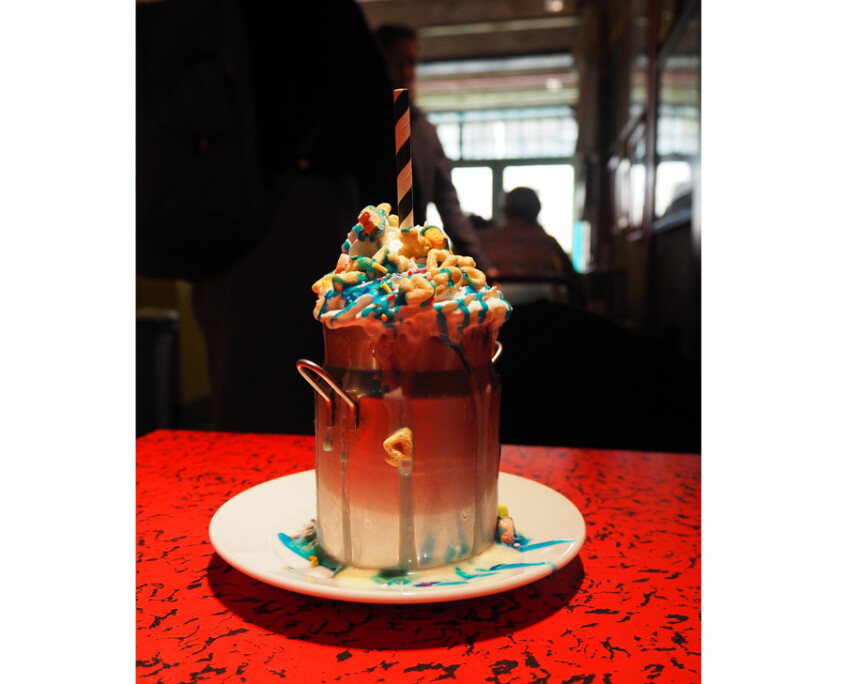 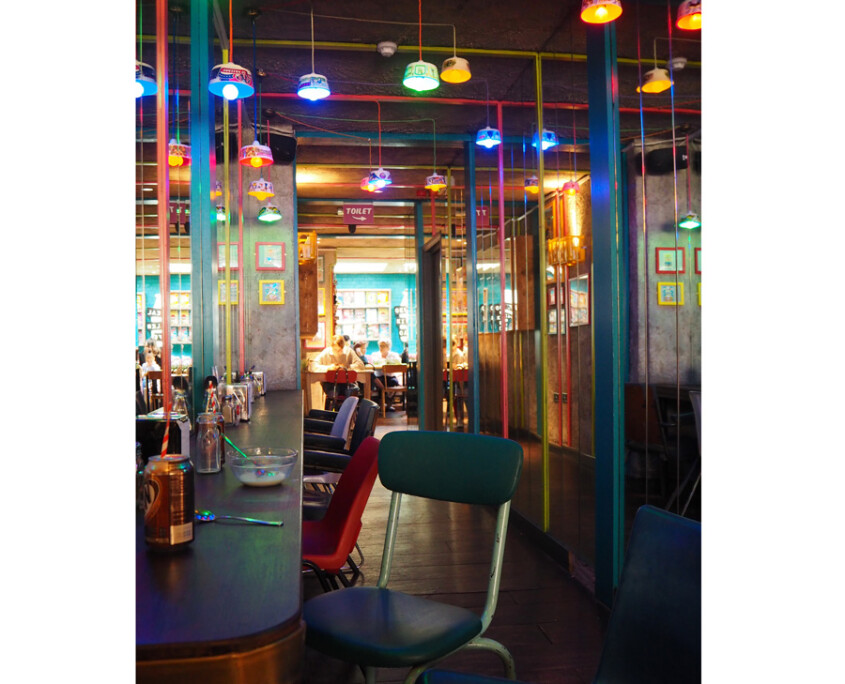 We kept on talking about life choices, world problems and everything frivolous to compensate. Sourena was done with his duty and we decided to meet at the Liverpool Street station to head to the core of the city. We walk toward the station passing through the beautiful Old Spitalfields Market and found each other perfectly on time by the double-decker bus stop.

We purchased Oyster cards, the magical prepaid pass to access all public transportation, and took to tube to Tottenham Court Road, the center of the center. Fish & chips was high and stable on Sourena’s wish list for this trip so we gave priority to spotting a place to grab some and we thought that the first one we saw would be our pick (prior double checking with Google).

Satisfied by the big portions of fish, chips and chicken pie at Ben’s traditional Fish & Chips, we walked around Covent Garden till Trafalgar Square and back to the Convent Garden covered market ending at the pretty Neal’s Yard Square where we stopped for a perfect coffee break at Jacob The Angel.

It was 5pm when they kicked us out of the café with free madeleines and I suggested experiencing one of the best thing of London, free museums and O. suggested the British Museum to take the most advantage of this treat. 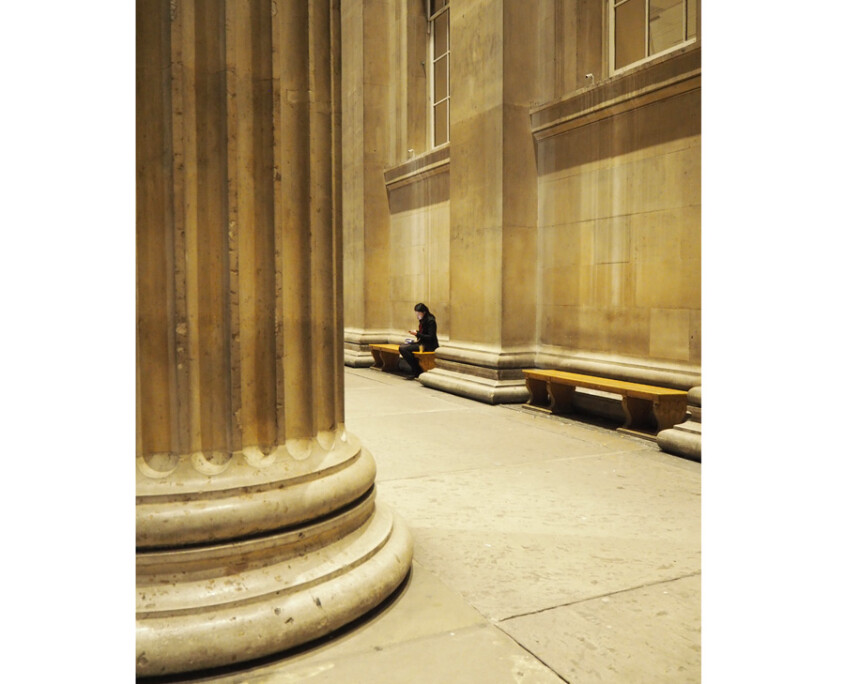 The museum was just a couple of blocks away and we walked along Bloomsbury Street where we stopped at Bookmarks for perfect socialist souvenir shopping.

By the time we were at the museum it was night and it felt nice to enter after the crowd had passed, we knew we would never manage to see the whole exhibition so we went for the highlights we were most interested about and we promised ourselves we would be back for a proper visit.

We had dinner plans with other friends so we thought it was best to head back to the hotel, rest a bit and slowly get ready for our evening at Sketch.

I had seen many articles about this outstanding restaurant in the center of London and when A. and F. told us that they had managed to make a reservation I could now believe I was actually going to be in what felt like a place only possible on magazines, but not in reality.

We suit up enough, but not too much to exit out comfort zone and took the tube back to the super center. We were, on purpose, a bit early and went for a walk around Soho and Carnaby Street and arrived at Sketch right on time for our 10pm reservation.

We met our friends there and were seated in the pink room, the Gallery, and it was a wow factor after another. We ordered all the dishes that inspired us and tasted a little of everything, from black ravioli to kale, from frog legs to chocolate mousse. The cocktails were a nice addition to it, as well as the trip to the toilet which I wouldn’t mention if it wasn’t spectacular.

Happy about the evening we said goodnight and planned to meet for a late breakfast. 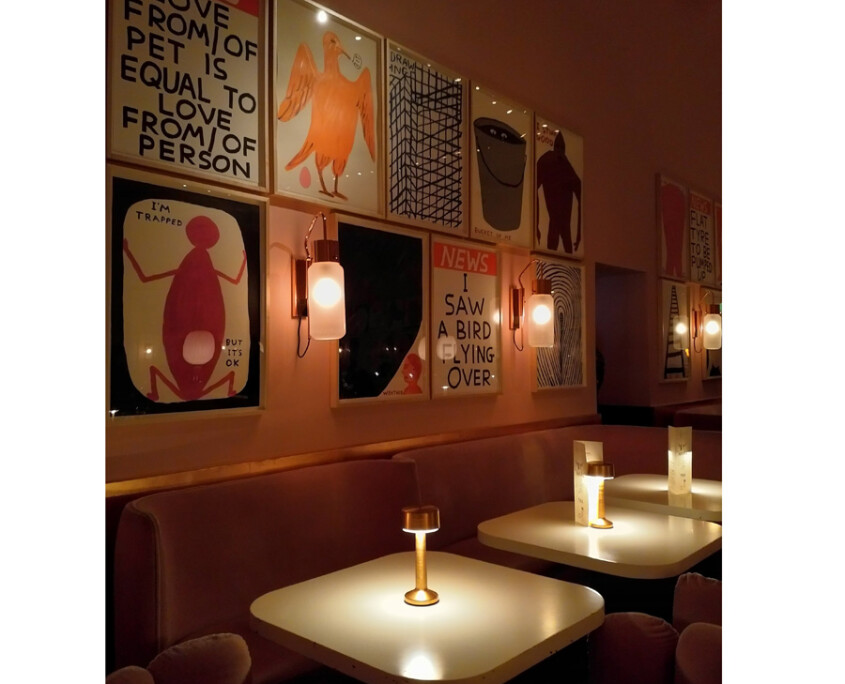 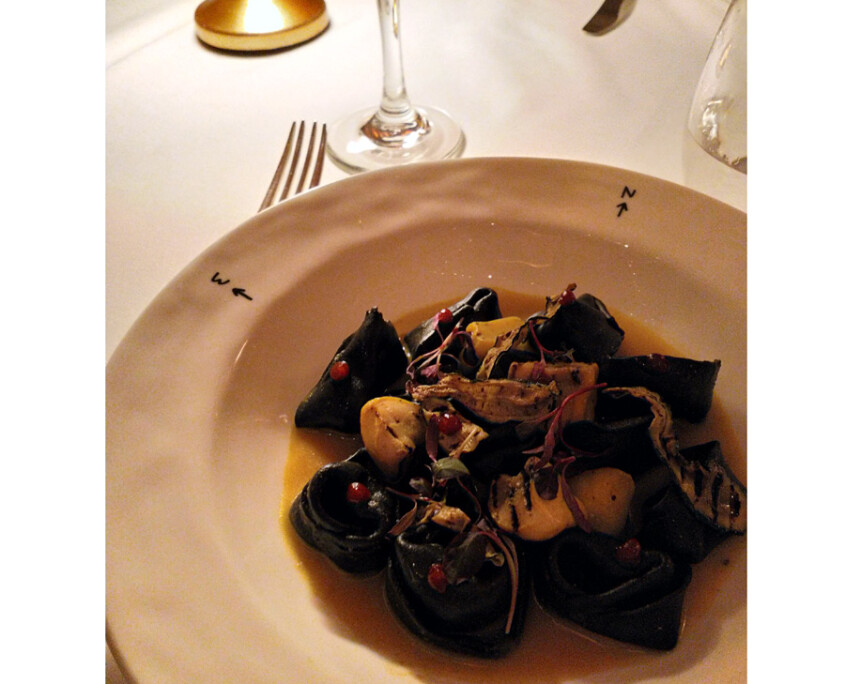 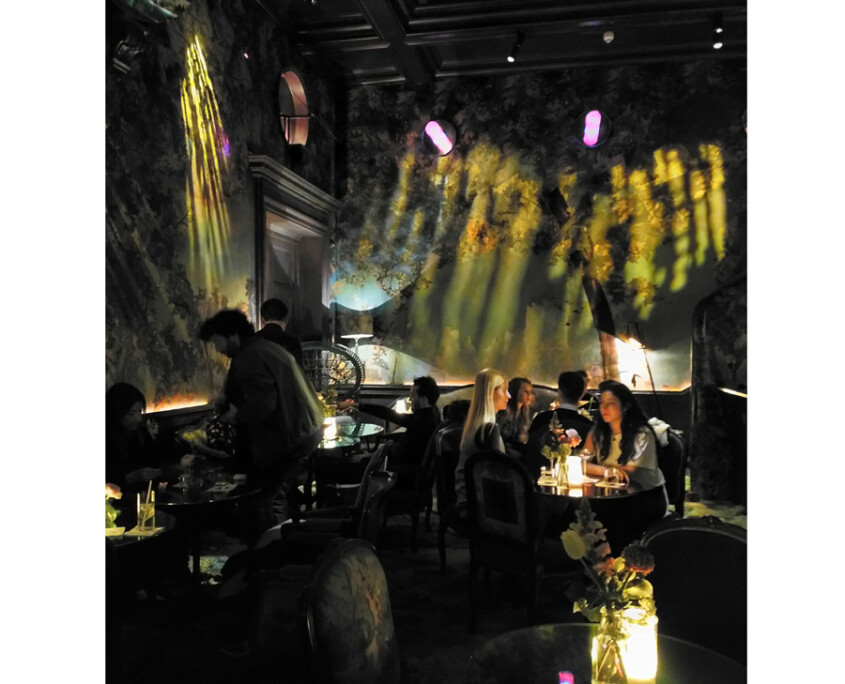 We woke up without alarm and inefficiently managed to meet O., A., F. and two of their friends (visiting for the weekend from Vancouver, just saying) at Duck and Waffles, a restaurant open 24/7 at the top floor of one of the skyscrapers around Liverpool Street. We didn’t find any duck to try, but their waffles were outstanding, as much as the views.

A fast, panoramic elevator ride later and we were back at street level. We said goodbye to A. and F. and got an uber to the Tower of London where O. and us were meeting G., a common friend. With her we were going to discover a little bit of the south bank and insider information about being an architect in London.

We romantically met half way the bridge and walked towards, and passed, The Shard, the tallest panoramic tower in London. G. brought us to the Borough Market where we had to fight our way through and from there we walked to the Tate Modern. 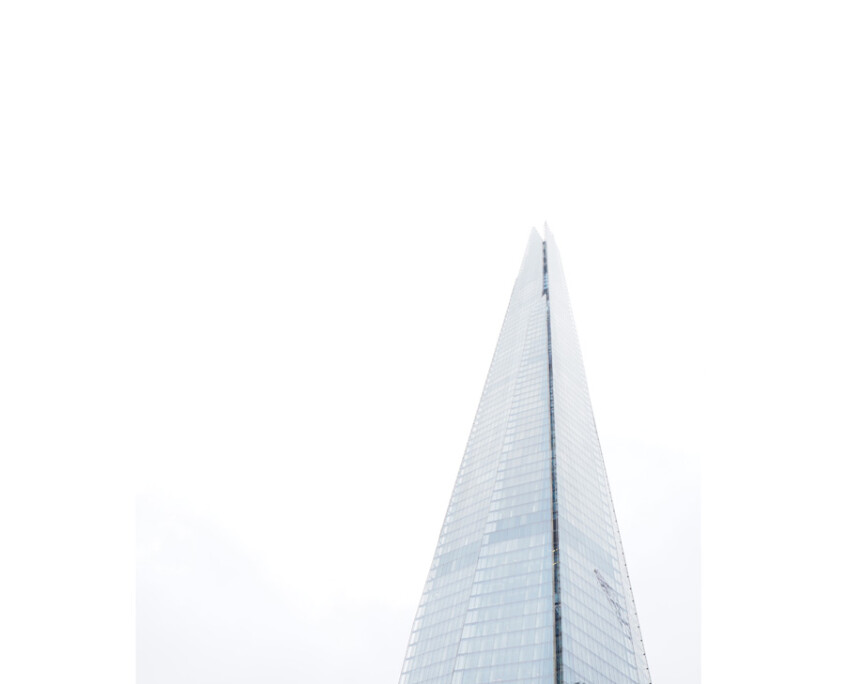 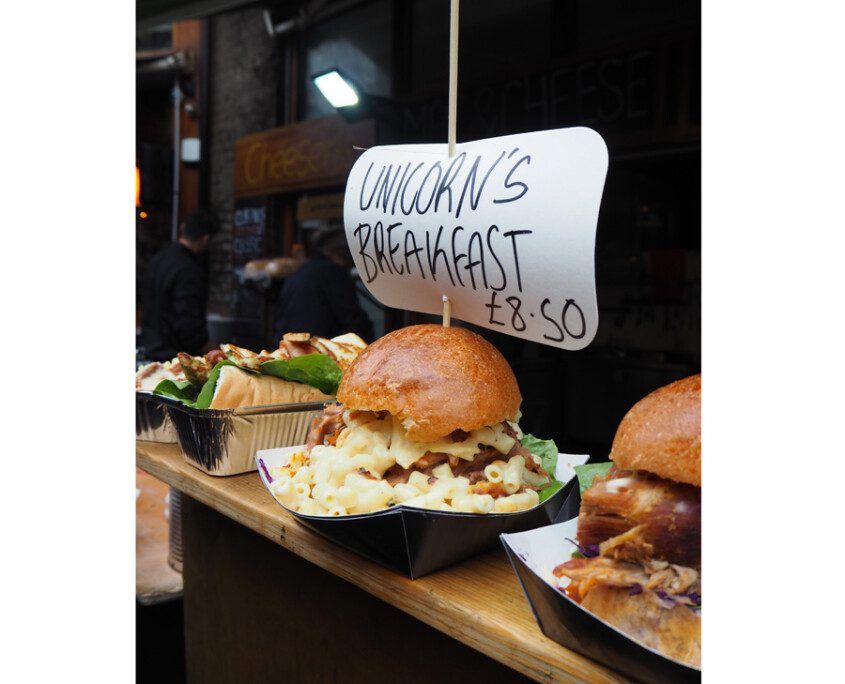 We decided it was too late to go on a tour and just stopped for a drink at café at the last floor. Despite the signs “Please respect our neighbors’ privacy” we overlooked the apartments built too close to the museum and went downstairs with the plan of reaching the Barbican Estate. We passed on the Millennium Bridge, next to St. Paul’s Cathedral and reached our destination, the brutalist complex that includes over 2,000 flats, two schools and an arts centre. 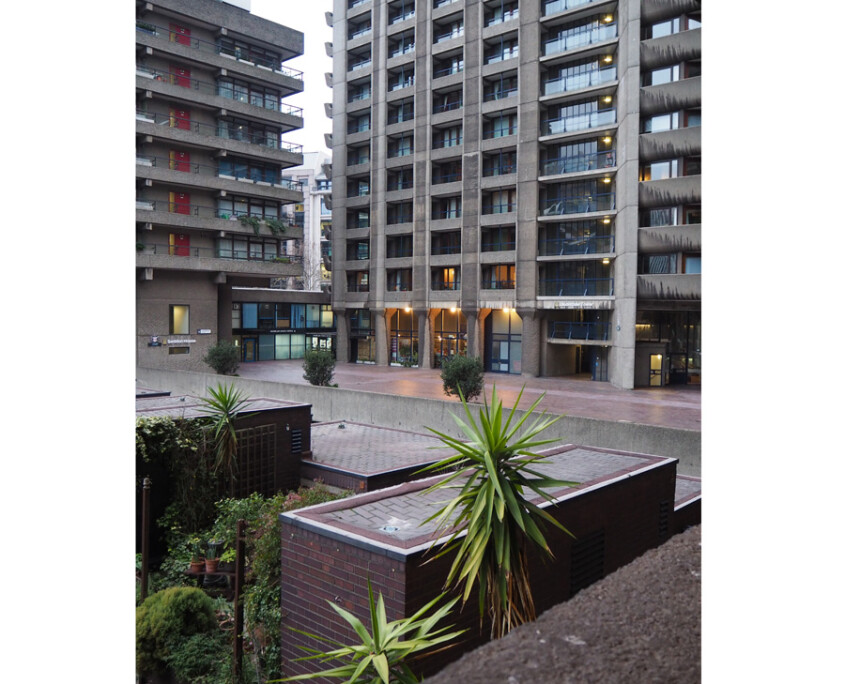 It was too late to keep on exploring and too early to go for dinner, so we decided to rest and meet again later at The Sugar Loaf for a beer and the pub experience, followed by dinner at Caravan City: nothing spectacular, but a good atmosphere to spend time with friends.

On Sunday we decided to stay at the CitizenM for breakfast and it exceeded my expectations, happy with the sun shining we decided to keep it very easy: meet O. in St James’s Park, have a sneak peek at Buckingham Palace, grab some food at Italian’s favorite Pret A Manger and head back to the airport, Gatwich Airport this time.