Tokyo was the last chapter of the trip: its crazy density, flashy lights, technological atmosphere, but also the deep connection to its roots.

After a very easy flight on which I became best friend with a stewardess (we are supposed to be facebook friends, but I underestimated the amount of people with the same name on this side of the world) we arrived in the Tokyo we expected: busy, neat, clean and organized.

I am glad this was not our first step into Japan, it would have been overwhelming; as the last chapter of the trip we felt confident and experienced enough to reach our accommodation super smoothly.

While Japan is debating if airbnb is illegal or dark grey zone, we rented an apartment in Shibuya and I was glad I had printed the 10 pages instructions booklet because every single line turned out necessary. There were many codes to many doors and even if very small that tiny apartment was full of electronics. When we managed to make the air-co work, our last step of settling in, we felt like we had just solved an escape room. 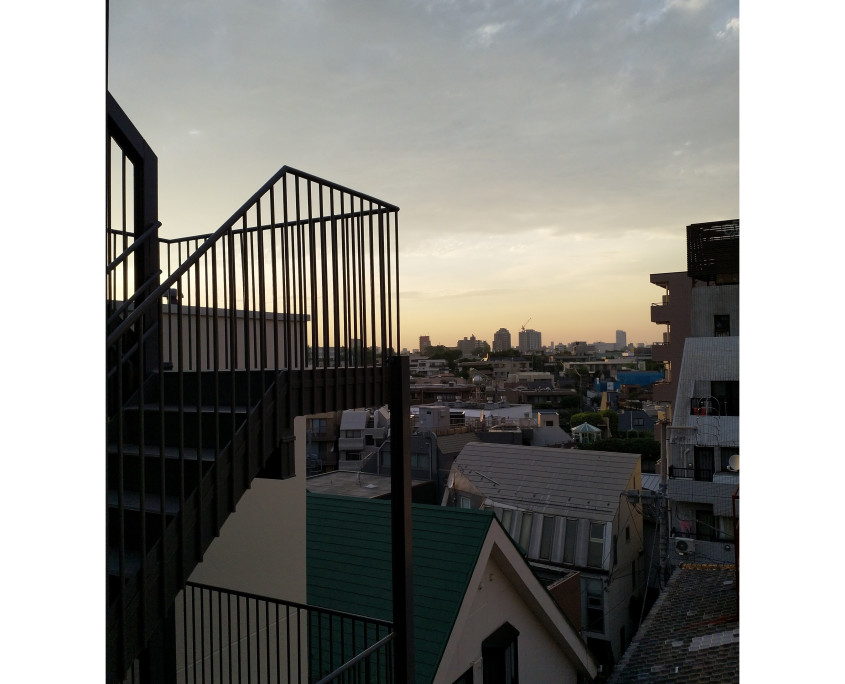 We started the laundry and headed out to explore the area.

We stopped first at a coffee place along the way, Wrapple, with the most amazing combination of drinks and wrapping material; that really made us fall immediately into the Tokyo experience. With our iced-coffees to we kept on going to the Car Street that is a very cute little street filled with restaurants and tiny boutiques. We had dinner at Oreryu because I was craving dumplings and we were happy we knew already how the automatic ordering machine worked. With this super-efficient system we were in and out the restaurant within 20 minutes.

Because it was getting late we walked back passing the Shibuya Crossing where indeed the crazy crown was fun to look at, even better from the second floor of yet another strategically located Starbucks café.

From there we passed the Center-gai Shopping Street. Since it was already dark the lights got all the attention while the young fashionable crowd was passing.

Unfortunately for me instead, the Mega Don Quijote was around the corner and the whole floor of fresh ingredient kept Sourena busy for a while.

Happy and tired we could only go back home and think what to do in the coming days. 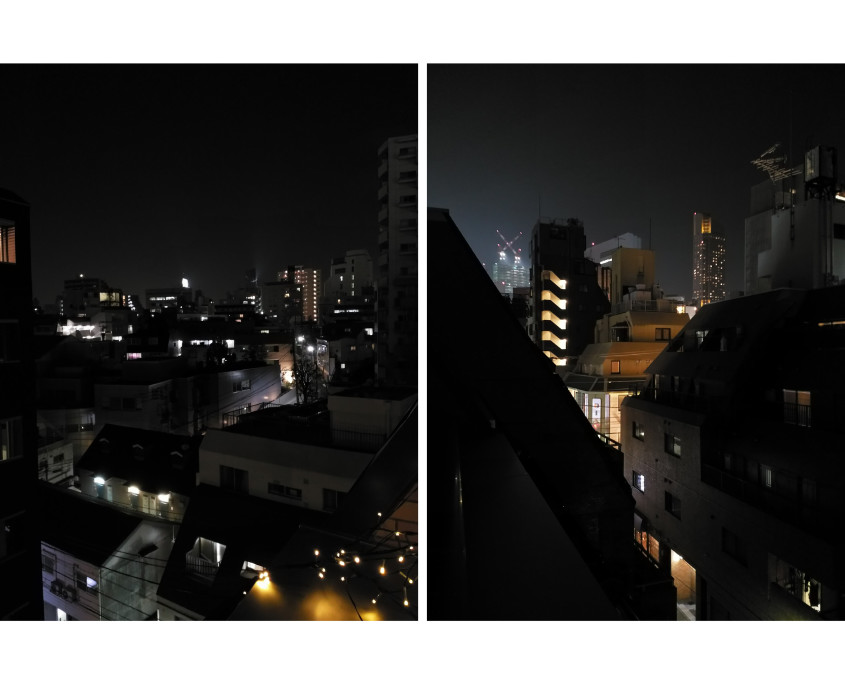 With the sun up and strong since 5 it was difficult to wake up late so we prepared a cute breakfast in bed and got out with a very active plan for the day.

It was all based on renting bikes. The fact that it took over 2 hours to find good ones was at least frustrating. Sourena is way too tall for Japanese standards, all the city bikes were super tiny and the alternatives were few and expensive. For this reason we went for the expensive but sure option at Niko And….

In general I wouldn’t recommend cycling in the city since it’s way too busy, chaotic and polluted, but for us it was really cool since we got to see a very big portion of the center and we discovered half way through the added value of assisted pedaling, that definitely helped the 20km ride. 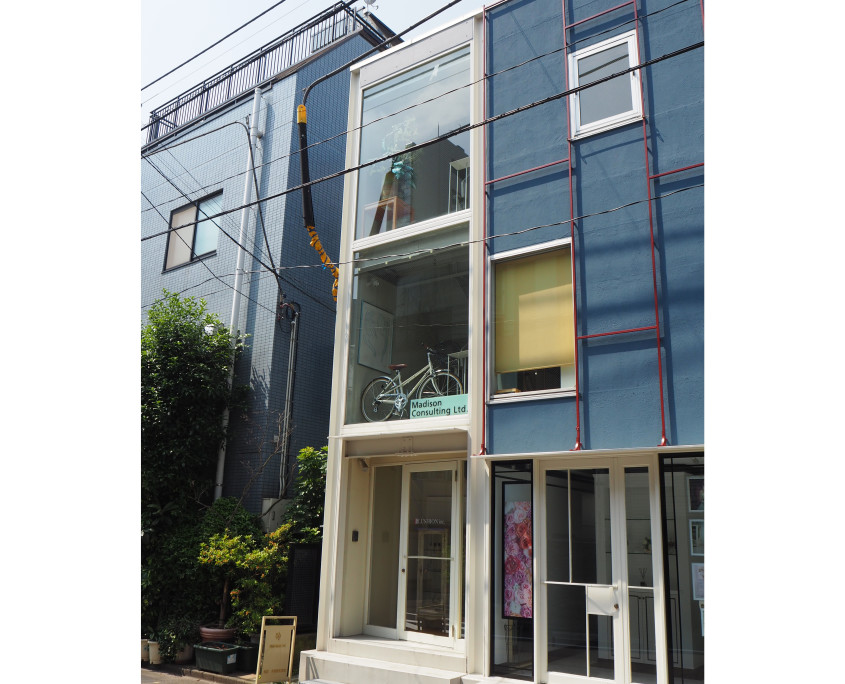 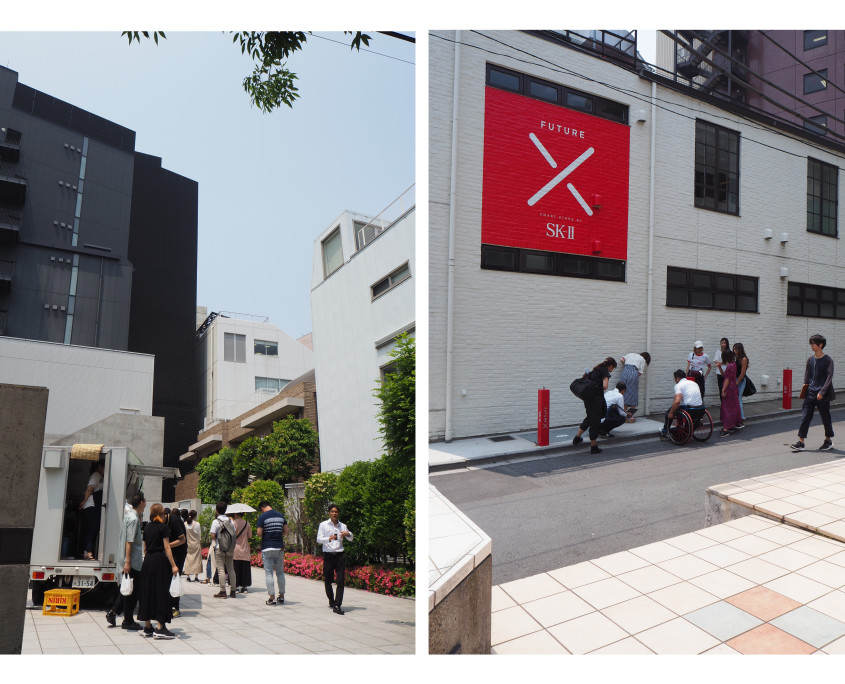 Right before and right after the ride we treated ourselves with tapioca bubble tea at two different locations of The Alley and grabbed a matcha ice cream served between cookies at the cutest café of Ciao Panic Country Mall.

Since we are speaking about food I’ll point out that while struggling to find bikes we stopped at Nata De Cristiano and Fuglen for coffee. Sourena confirms that the natas were as good as in Portugal and we both agreed that the coffee at Fuglen was the worse we had in a while, but we can’t deny the nice, hip atmosphere of the place. 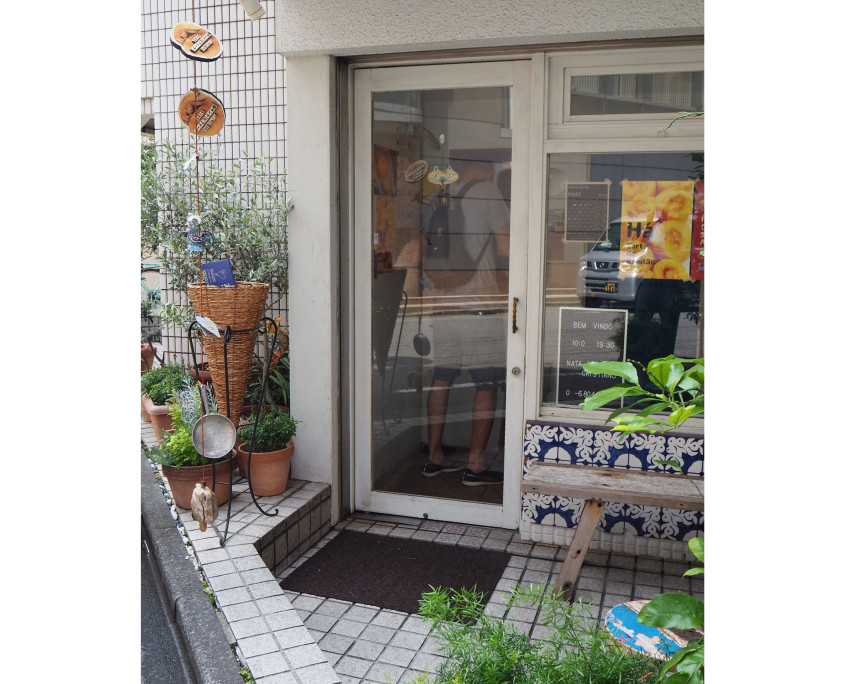 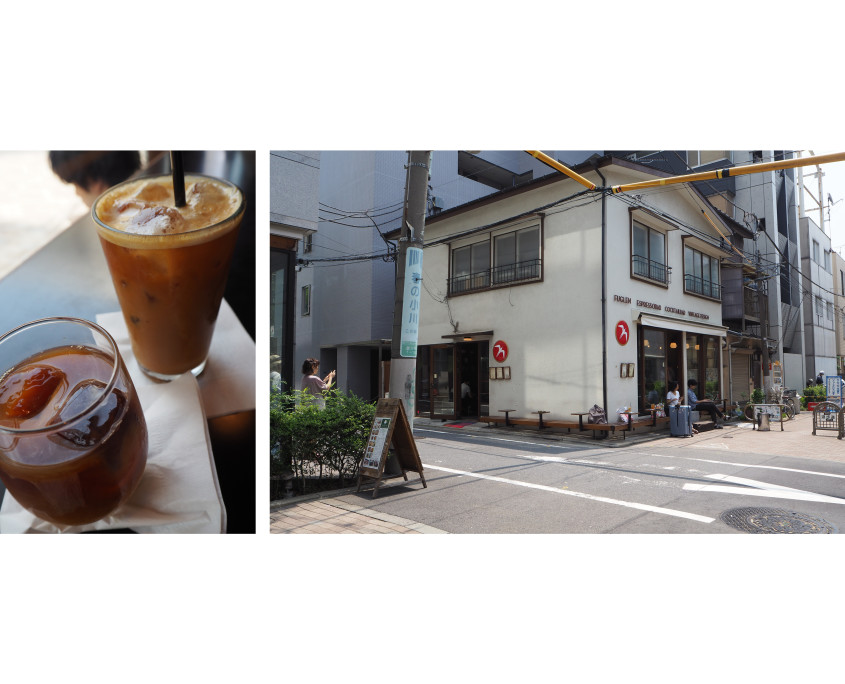 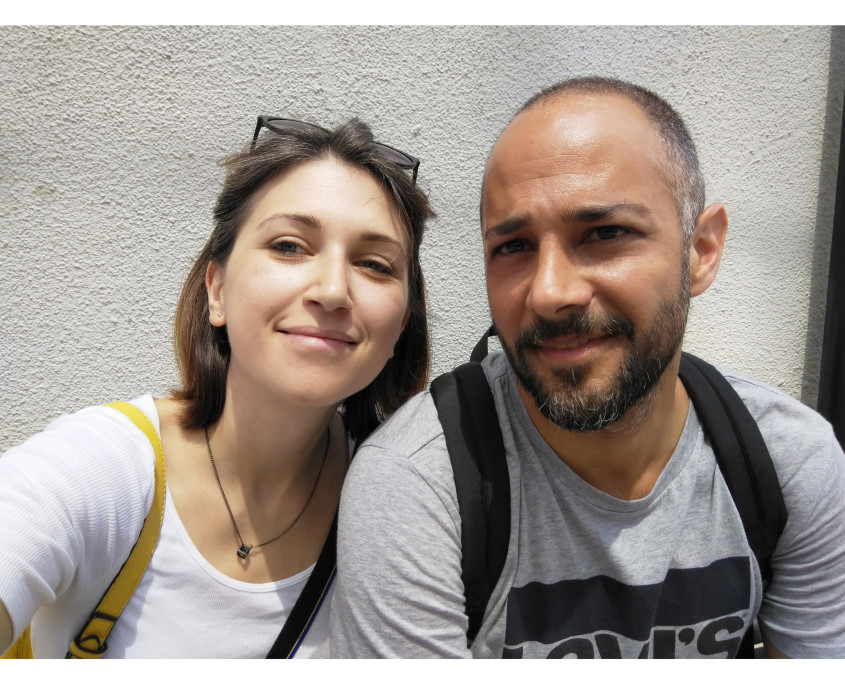 So, back to the ride, we first went towards the Metropolitan Government Buildind and their observatory at 202m over the Shinjuku district. We tried to pass through the Yoyogi park but they made it very clear with all the running and yelling that it’s not allowed to cycle in it.

Disappointed, we got our peace of mind when we arrived on top of the skyscraper. It was hazy and so beautiful: Tokyo simply kept on going endlessly. 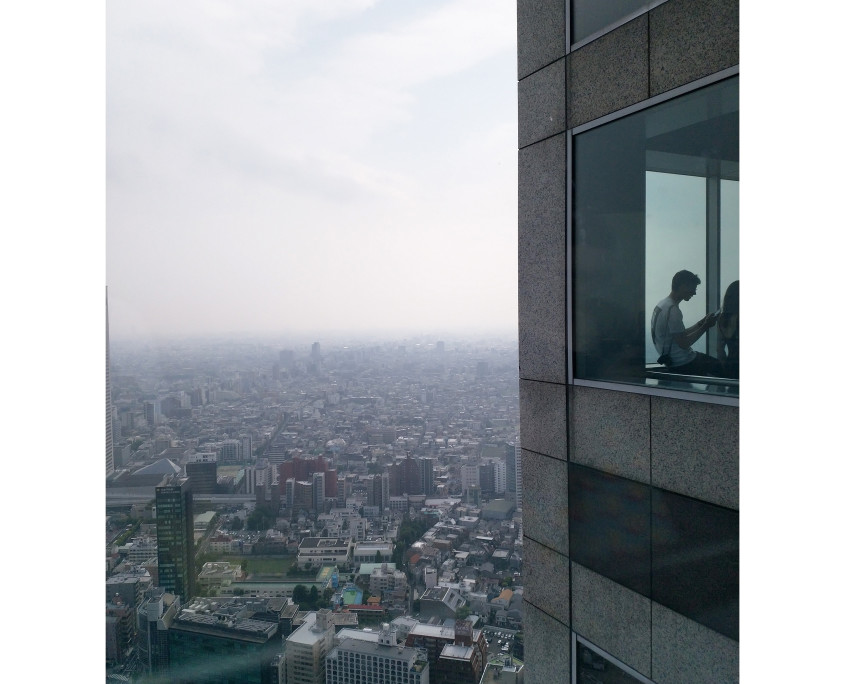 Recharged, we went back to our bikes and decided that it was possible to reach the Imperial Palace. It didn’t take long and cycling among the traffic was challenging and energizing at the same time. We arrived at the palace walls from the north and realized that the gardens were closed, but it was not our priority so we just kept on cycling along the moat and decided to just keep on cycling and return the bikes. The 4pm traffic was starting and we didn’t want to get too stocked in it.

After dropping the bike we slowly walked home. Along the way I really wanted to stop at Bic Camera, an electronics shop and be overwhelmed for a while. It was pretty easy to accomplish this wish.

At that point we definitely needed some rest and food, so I asked a friend of mine and he recommended Es. That was really a precious suggestion.

On the 11th floor, just behind Shibuya Crossing, this busy restaurant had delicious food and a very modern Japanese atmosphere. We didn’t really manage to speak with the waiter, but it wasn’t really a problem.

On the way out we stopped at the only small shop I had seen in Tokyo, Cosi Cosi and it was so cute I had to buy some souvenirs and we could happily go to bed.

We arrived in Tokyo with a wish list but soon realized that many things had to be booked so much in advance that it was ridiculous anyways (Sumo competition, Yayoi Kusama museum are the main ones). For this reason we quickly regrouped and made other plans instead.

What we came up with was a tour of the Tsukiji Market and the Ginza District, Yoyogi Park and the Vietnam festival that was held that weekend and the Roppongi Hills at night. Best plan B ever.

We woke up and had another of our small breakfast in bed (by then we had tried basically everything from the pastry department of Family Markt) and walked around an almost empty Shibuya to reach the metro to go to Ginza, the high end neighborhood in the center. 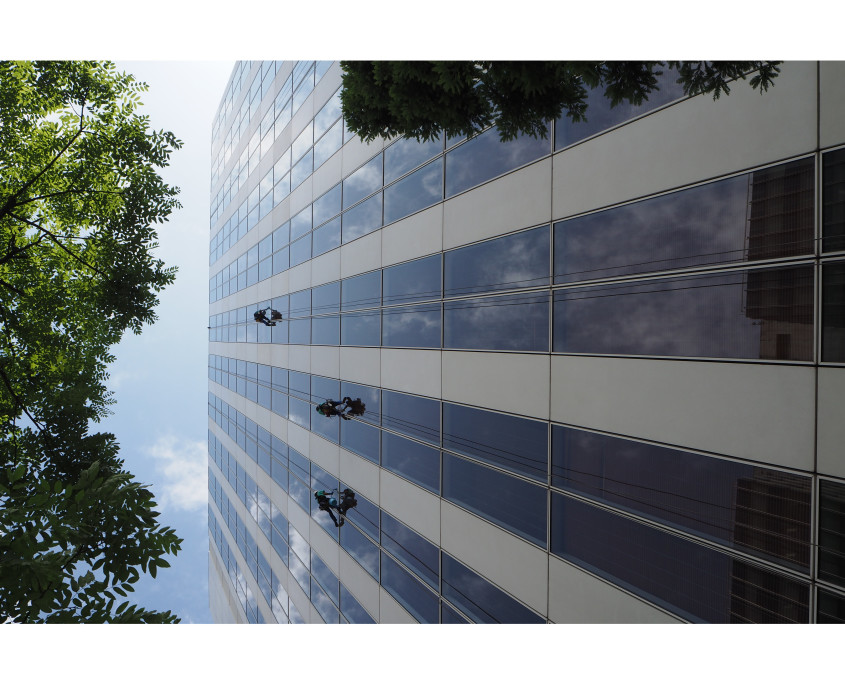 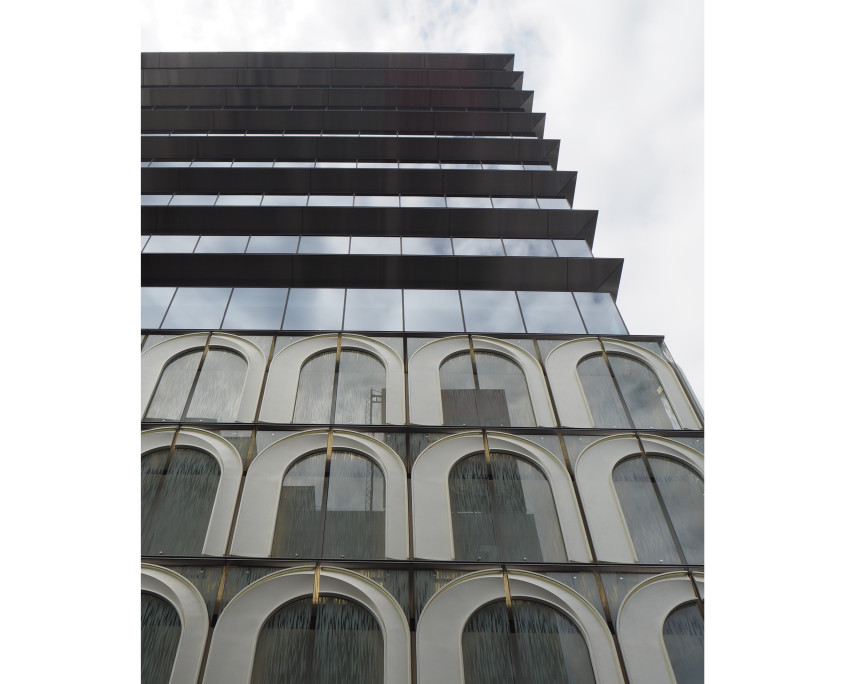 There we walked along the new complex Ginza 6 to arrive to the Tsukji Market, possibly the biggest attraction of Tokyo. We were overwhelmed by the smells, the extension of this place and the amount of people and after tasting a couple of things we decided that it was all a bit too much for us and that we would have rather done some shopping instead. 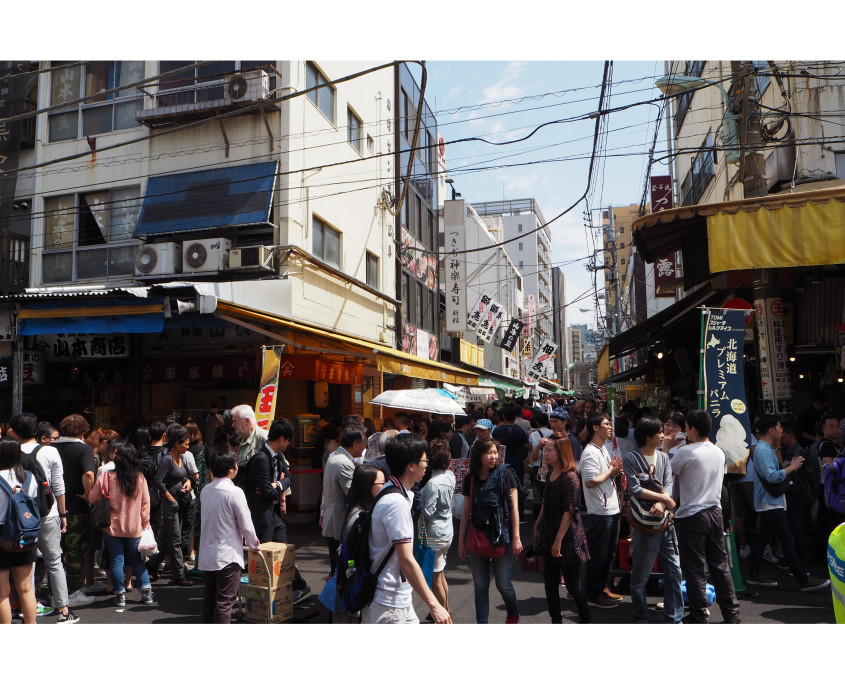 One coffee, one shop, two bags and 1 hour later we were on the other side of city, late for a lunch with Riccardo, a good family friend of mine. I had randomly planned this trip aware that he was around but not 100% sure we would manage to meet and I was beyond happy that it happened. Added value was the fact that his mom was also visiting and it was crazy to see her with her partner on the other side of the world instead of at my parents place.

We met for lunch at the Opera Complex and we just followed Riccardo and his beautiful girlfriend, Yukko, till the 53rd floor. There the beautiful Jojoen restaurant overlooks the city and offers delicious shabu-shabu. Luckily Yukko was there to lead us through the menu and teach us what to do when the food arrived. It was the first time we played with food during the trip and, mess apart, it was cool to assemble our meal together while chatting.

Since they had to catch a flight to Hokkaido we rushed out of the building and said goodbye.

As we had thought we walked to the Yoyogi Park, then through it till the Vietnam festival. It took longer than expected but the forest of the park and the paths to the Shrine were so beautiful that I didn’t mind at all. Not sure about Sourena.

We arrived at the festival and it was extremely obvious that we were the very few westerns in the whole crowd. We were so interesting that stand owners called us to take pictures and offered us fresh coconut water.

Walking around we noticed what we thought was bamboo juice (I realize now how moronic that might sound) and decided to order one to then discover that it was sugar cane juice, by far the sweetest thing we had tasted since our arrival in Japan. 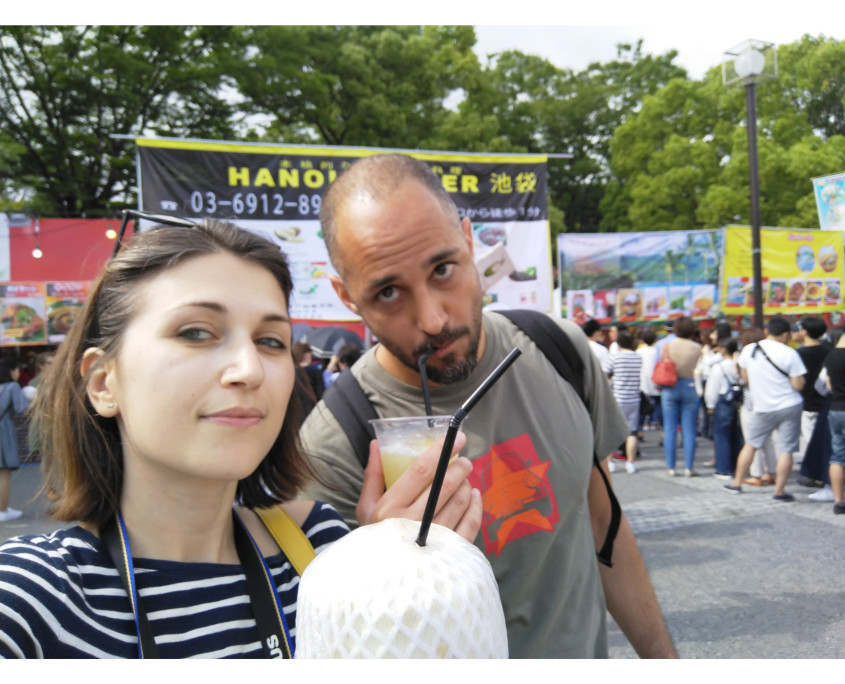 Loaded in sugar we walked home, stopped for some extra shopping at our new favorite shop, Uniqlo and collapsed. Sugar rush style.

I still had one thing on the wish list and I was motivated so after a nap we went out to reach the Roppongi Hills at sunset and enjoy the view from their observatory.

Getting there was more complex than expected because of the works at the Shibuya bus terminal and when we made it little did I know that the ticket price was connected with the temporary exhibition about Japanese architecture. I quickly decided to go for both. The view was indeed stunning and surprisingly so the exhibition was even better. If we weren’t already tired and hungry I could have easily spent hours there. 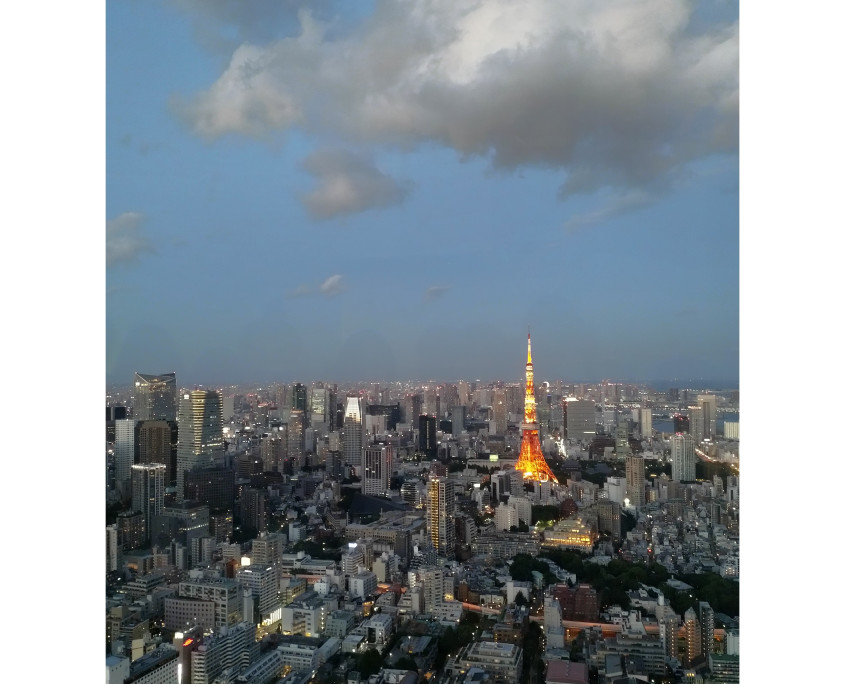 We decided to end the trip with a lovely home assembled dinner, so we did some grocery, notice guys walking around with owls to promote their new owl café and stared at the glass towers of karaoke booths. The essence of what I wanted to see in Tokyo.

We took the direct train to Tokyo Narita and enjoyed the smooth ride through the city and then the countryside. As everything else the airport was super organized and I don’t even remember how we got to the airplane as smooth the whole procedure was.

We got lucky and set on the left of the aircraft and from there we got a very good view of Mount Fuji. A very good end to this perfect trip. 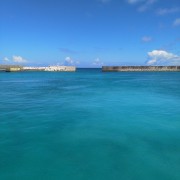 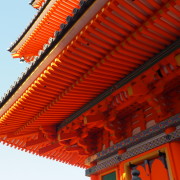 traditional Japan: Kyoto and its surroundings 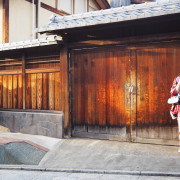 the perfect 11-days-trip to Japan

top Italian “but first coffee” in Rotterdam
Scroll to top